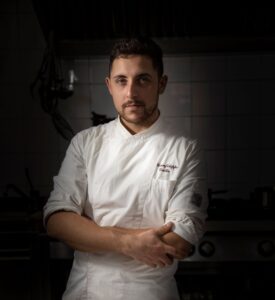 Gianfilippo Gatto and his idea of cooking

Cooking is an ancestral act, I love food and I respect it. We are constantly looking for techniques to raise the raw materials of our land to the highest levels, without ever losing sight of the true essence of the latter.

Gianfilippo Gatto was born in Palermo, capital of culture, including culinary.

From an early age, chef Gatto chose to follow the path of cooking, driven by a strong passion transmitted by his family, which enjoys extensive experience in the restaurant world, and by the guidance of his mentor, chef Vincenzo Pinto. Gianfilippo discovers and immediately understands the substance of the art of cooking.

The curiosity to know different culinary realities leads him to leave Sicily and work at various important structures located in Italy and abroad. His love for the land and the desire to embark on a new path brings him back, strengthened by the new knowledge and skills acquired, to the “A’Cuncuma” restaurant.

Chef Gianfilippo Gatto is a fervent supporter of Sicilian products and their versatility in the various preparations. In the new management of the restaurant he is joined by the maître sommelier, as well as his life partner, Valentina Crescimanni with whom he shares the interest and passion for local products. Valentina personally takes care of the wine list guided by this line of thought: in fact, there are some of the best wines of the Sicilian territory.

Together they are constantly looking for small realities, products and producers to make known within their restaurant.